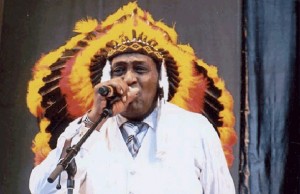 Despite blues players hailing from various points in the South and congregating in Chicago, the town’s music has developed a distinctive sound. Of course, an outcropping of that was a homogenized take on the genre, making some second-tier players less than scintillating to hear. But that’s more the fault of the music’s restraints than the performers. Amid the crop of guitarists who cut albums and became synonymous with blues was a Mississippi native named Eddy “The Chief” Clearwater–well, Clearwater was levied on the performer by a manager to play off Muddy Waters’ moniker. Either way, gigging around the West Side of town during the fifties found The Chief becoming part of a movement that would, in a few years, enable shaggy-looking Brits to craft hits based on what had become tradition. Somehow The Chief stayed away from recording studios, only issuing a spate of singles through the seventies. Clearwater’s first studio album, “The Chief,” wouldn’t be released until 1980, although a few live documents exist of the preceding era. Regardless of his lack of recorded work, the guitarist toured Europe a few times in the company of the town’s luminaries. Tours weren’t necessarily widespread and frequent, but Chicago offered, then as it does now, a wealth of places for adept performers to display their talents—and in Clearwater’s case a feathered headdress denoting autochthonous blood as well as a mysterious tie to Mardi Gras parade costumes. With such a buoyant market in Chicago, Clearwater attempted, during the nineties, to open a venue near the Milwaukee and Damen intersection. Unfortunately, Reservation Blues eventually folded, but The Chief carries on. (Dave Cantor)