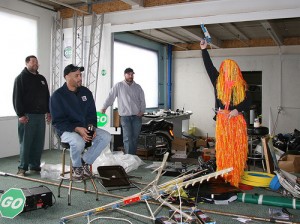 Of the two Cleveland bands set to deliver well-worn metal and hardcore to audiences at the Cobra Lounge, Ringworm’s the better-known act, having worked with Victory Records during the better part of its career. And as a connection with that label hints, Ringworm takes itself as serious as its labelmates take animal liberation. Dedication is well and good, but occasionally makes the band hard to palate. “Angelfuck,” from last year’s “Scars” is tough to take in, but near classics like “13 Knots” just go down easy while aping a bit of thrash. Smart-ass uncaring runs through Keelhaul, though. Album titles like 2009’s “Triumphant Return to Obscurity” and a single from the same year called “You Waited 5 Years for This?” point to the level of professionalism the band holds itself to. Since its first releases began flowing during the late nineties, Keelhaul’s worked to incorporate a wider swath of rock stuffs into its take on heavy music. That latest disc, “Obscurity,” sports efforts like “THC for One,” a brawny effort of calculated musical acrobatics. It’s not Battles, but there’re enough twists and turns, not to mention distant vocals, to keep listeners guessing as to what’s coming next. Its first recordings, though, portray a band imminently connected to heavy musics and tempos as sluggish as continental drift. Hooking up with Hydra Head a few years back found the band shooting its musical load on a wider audience while still remaining a generally unknown commodity. Hearing “Enervate”’s five minutes of grunted vocals and off-kilter metal licks should convert the uninitiated. If it doesn’t, there’re four albums worth of similar fare waiting to surprise folks familiar with black hoodies, but unfamiliar with Cleveland’s rock lineage. (Dave Cantor)