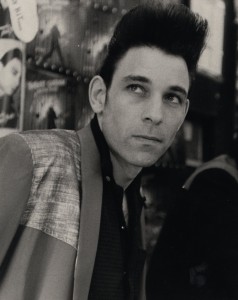 The rockabilly genre’s pretty absurd—not that indie stuff, punk or whatever else isn’t. But at rockabilly shows, it’s pretty easy to catch furrowed brows, even if attendees aren’t attired in the proper duds. And really, who wants to dress like their fat Uncle Charlie? Attire fit for bowling, Gretsch T-shirts and DAs seem better suited to Jon Favreau movies than daily life. Utter devotion to a style, and a musical genre, that hasn’t changed in sixty years, though, is remarkable. The fact that new groups crop up and are able to tour with relative renown means enough people still care about Elvis and his descendants to pack rooms. Robert Gordon, who doesn’t even rank as a second generation rockabilly dude, has been racking the music, stretching it out, reusing it and declaring the entire thing new for about thirty years. He recorded with Link Wray, so there’s gotta be some merit to the dozens of records donning his name. What’s happened since those late-seventies recordings with the legendary guitarist is that Gordon’s voice has dropped significantly. He’s almost in Sleepy LaBeef territory on last year’s “Satisfied Mind.” The disc, issued through a Euro imprint, finds Gordon in the company of an adept band, but one that adds in some inadvisable clavichord in places. Since the music on his latest release follows the same basic blueprint that was functioning before Link Wray ever heard of Gordon, there’s nothing longtime fans are going to be dismayed by. What’s interesting about the guitarist, and just about any throwback, is that covers invariably function as an important part of his repertoire, explaining why “These Boots are Made for Walking” closes “Satisfied Mind.” There’re bound to be some choice covers levied on showgoers as well. To further rev-up the Wayback Machine, Chris Spedding, who Gordon’s frequently recorded with in the past, is set for an appearance. (Dave Cantor)