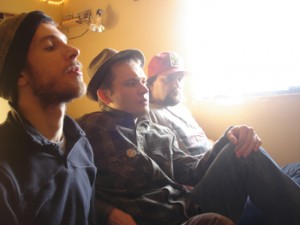 There’s some weird magic at work behind Mako Sica’s music. It’s still a rock band, kinda. But one in the tradition of intellectualized musicians, aching to make grand statements with the least amount of sound. As a trio, the band’s not raving up huge waves of feedback, possibly turning off listeners who prefer pop to brawny instrumental breaks. The band’s recordings lean toward the sparse side of psychedelicized rock stuffs, adding in a bit of jazzy intent and concrete enough to sidestep terms like noise. Hearing any of Mako Sica’s releases approximates what it must have been like to witness Pink Floyd warm up while Syd was still trying to lead the group through whatever imagined door he saw in his mind. “5th One is the Dark,” from the group’s “Noise Attic Session 2,” gets accidentally pastoral as the composition breaks down for a minute after some noodling opens the track. It’s hard to believe most of this is orchestrated ahead of time, but a few passages find percussion and guitar moving in and out of time in unison. At points, the drumming seems to be a few developmental stages behind the rest of the band, but the almost-flops make each instance reek of charming assuredness. Michael Kendrick doesn’t ever drop the beat, but at times it seems as if he’s being lulled into that same narcotic mood as Mako Sica’s intended audience. Over the Chicago trio’s several releases, the persistent distance between where the band sounds like it’s recording and what winds up dripping out of speakers seems like miles. It’s Brent J. Fuscaldo’s echoed moaning lending Mako Sica a vaguely penitent mood. Whatever or whoever he’s speaking to, though, doesn’t seem responsive. Hopefully, there’ll be further confessional recordings. (Dave Cantor)