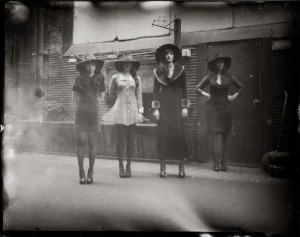 In a city so determined to frame itself as a Southern cultural center, Nashville deals with a variety of problems—including the fact that the town’s two museums don’t really own a permanent collection. That weird realization can be tied into its music scene too—well, the music scene not associated with big-name country acts. The Black Keys (Akron natives) and Jack White, the creepy Dracula-looking guy from Detroit who used to be in a band called The White Stripes, rank as arbiters of good taste. That’s all well and good, but the fact that neither Akron nor Detroit really have much to do with Nashville is problematic. To remedy the problem and further insinuate himself into the city, White stitched together a handful of locals to form The Black Belles. Let’s for a moment ignore that the band looks like it was modeled on The Dum Dum Girls’ press photos and focus on the hard rock of its music. Yeah, the band was on “The Colbert Report” and White’s issued something like three singles by the band in addition to its eponymous long player. Economically, it’s certainly working out—The Black Belles are an amalgam of White’s various ensembles, working in a touch of garage, some thick clav chording and a dash of pop-styled songwriting. “Honky Tonk Horror” reels in the band’s country (locale, not music) beginnings while lyrically adding a bit of Bettie Page naughtiness. What’s interesting about The Black Belles and White’s increasing ubiquity is that he’s become a brand as much as Gretsch or Gibson. Whether or not he’s going to claim credit for any success The Black Belles earn remains to be seen. Either way, the Belles’ “The Wrong Door” could soundtrack a Munsters’ clip show. (Dave Cantor)