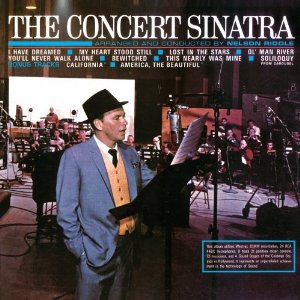 In the early sixties there were no such things as multi-track recording facilities. The music was recorded into two or four tracks and later ‘bumped’ into a single track so additional music could be added on the remaining channels. This worked rather fine in a recording studio (albums like the Beatles’ “Sgt. Pepper’s” were made that way), but what could be done if someone wanted to make a record with a full orchestra and a rhythm section? When Sinatra made this album in 1963, the solution was to record everything at a Hollywood soundstage using various sound recorders that used 35mm film instead of magnetic tape.

The misleadingly named “Concert Sinatra” (it is not a live recording) features a collection of reworked takes on Broadway tunes (mostly written by Rodgers & Hammerstein). Instead of swinging the tunes, he delivers them with great feeling.  Though it is rather strange to hear Sinatra sing about “the white folk” in “Old Man River,” he makes the tune his own without taking away its poignancy.

Almost half a century later, his son Frank Sinatra Jr. worked toward making a new master taken from the restored cans of film. The result is a pristine recording in which every nuance of Nelson Riddle’s arrangement sounds as clear as it might have been during the sessions. Sinatra’s voice stands out without overwhelming the sounds of the instruments (though there is no way to compare the original versions since this title had long been out of print), and the emotion of his delivery of songs like “Lost in the Stars” and “Bewitched” feels as fresh as ever. (Ernest Barteldes)