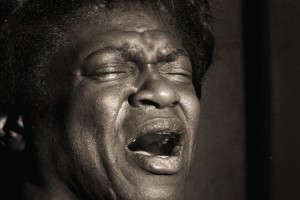 Unlike Lee Fields and Chicago native Syl Johnson, Charles Bradley doesn’t boast an extensive back catalog detailing soul music’s slight evolution. The sixty-three-year-old singer didn’t release a record until 2002. Over the course of Bradley’s life, not much has changed in the genre apart from production values and singers being included on hip-hop tracks to belt out a stray chorus or two. His serpentine path to the stage and recording studio lends him a sort of all-knowing weariness longtime pros might not be able to summon on the mic. Hooking up with Dunham Records, a Daptone offshoot, and counting The Menahan Street Band as support hasn’t been detrimental either. After kicking around both coasts and performing while not working day gigs, the singer eventually made it, a tale he spins out on track after track over the course of his first full-length, the 2011 “No Time for Dreaming.” It’s actually difficult to imagine any singer would have the ability to grunt out lines like “You used me/I guess I’m just somebody’s fool,” from “In You (I Found A Love),” with the emotional bravura Bradley delivers if his or her life had focused solely on performing for the preceding few decades. That initial long-player was followed by a spate of live dates, during which the singer found himself embraced by critics, fans, geek collectors and anyone looking for an opportunity to dance. Looking to consolidate the heat he’d amassed, Bradley recorded a version of Neil Young’s “Heart of Gold,” perhaps an attempt to draw in any stragglers left in the rock community. While the tune doesn’t quite approach the grandeur with which Bettye LaVette imbued the track, the recording accidentally points out that even if Bradley isn’t on point, any group he’s assembled is more than capable of holding a listener’s attention. (Dave Cantor)