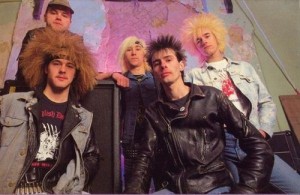 On 1984’s “Invasion of the Porky Men,” The English Dogs seem strangely preoccupied with war. There’s an entire track dedicated to the idea that folks don’t sing about World War II like they should, instead focusing on then-pending nuclear disaster. It doesn’t seem like too much has changed in three decades, apart from that one Metallica track based on “Johnny Got His Gun.” There are probably more than enough songs detailing the Nazis’ finer ideologies, Ian Stewart being a fine lyricist despite his troublesome choice in politics. But singer Pete Wakefield didn’t dedicate the entirety of the Dogs’ first album to the war of our greatest generation. A number of songs detail breezy stuff like killers—the surprisingly named “Psycho Killer” sticks out, if not for its focus—the pace edges a bit faster than on the rest of “Porky Men.” The entire disc, Wakefield’s only album with the band during its early period, is a pretty good distillation of what happened to punk after the sheen wore off and major labels realized that not every ensemble with weird clothes had the ability to sell albums like The Clash. Today, though, acts like The Exploited and Discharge (the latter sharing early tour dates with Wakefield and company) appreciate a sort of cult fandom only appreciated by those who take the time to check out patches plastered on scummy dude’s backs milling around downtown, sparing change with their regrettable-looking dogs. Punk took on huge political ideas and attempted to distill the concepts into two-minute songs. The tactic rarely worked. But looking back, songs about getting plain wasted still come off pretty well—including “Cranked Up Really High,” a Slaughter and the Dogs cover The English Dogs included on its first long player. The Casualties and Toxic Holocaust open.  (Dave Cantor)