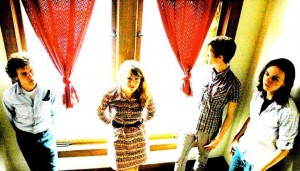 Champaign-Urbana’s Grandkids know a thing or two about a thing or two, but they’re less-than-likely to tell you about it. That is because the self-described “humblecore” band, consisting of Vivian McConnell, Evan Metz, Adam Gorcowski and Phil Sudderberg, would rather let their music do the talking. Starting February 16, the foursome will mosey about the Midwest for a tour in brief, spanning St. Louis to Indy, Champaign to Chicago’s own Subterranean Lounge for their final show (for now). Despite the name, the group appears mature beyond their years, pumping out catchy words and enchanting vocalizations all laid over a dreamlike, mostly guitar-driven soundscape. It’s ideal rainy day music—or, when nature deems it too cold, music to accompany a dwindling winter.

Unique to Grandkids’ sound is the use of cello and strings, an element much of modern pop music lacks for one reason or another. Maybe it’s a bit antiquated, maybe it’s just not “hip” anymore, but Gorcowski and his bandmates are bent on reintroducing it to the masses. Though it doesn’t appear on every track, the variety of instrumentation is a much-welcomed addition of depth to the band. The bill is rounded out by openers Secret Science, Slothpop and Union Tree Review. (Derek Walker)