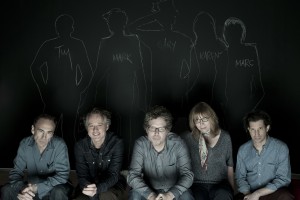 The Jayhawks’ story is the tale of a group of folks congregating to make music, becoming focused on other aspects of their personal lives, leaving and coming back when the time seemed right. Founded in Minneapolis during the mid-eighties when Twin/Tone Records served as the town’s cultural outpost, The Jayhawks aped a country and rock hybrid that manifested itself on a pair of low-key releases before they inked a major deal and issued “Hollywood Town Hall,” generally thought to be the ensemble’s peak, in 1992. Songs like “Two Angels” and its harmonica fit the band into folksy territory, just one with a propulsive backbeat. Songwriting and vocal duties being split between Gary Louris and Mark Olson provide that necessary duality from which any good band benefits. And sporting studio support from the likes of Nicky Hopkins didn’t hurt much either. While the album didn’t produce a discernible hit, its persistent quality and a general vibe of assuredness made for a sturdy entry into country-rock’s pantheon of understated classics. Line-up shifts accounted for some uneven releases a few years on, but nothing that ranks as work better left unrecorded. Eventually, The Jayhawks called the whole thing off around 2003. What’s weird, though, is that Louris and Olson, who were estranged for a bit of time, persisted in performing as a duo during the band’s time off. The partnership always hinted at a reunion, and a proper return to the studio was issued last year, titled “Mockingbird Time.” Hard rock has marked the band’s comeback, “Cinnamon Love” bearing Neil Young’s mark musically as much as in its title. Louris and Olson, though, retain the ability to sing just about anything together and have it come off as honest, well composed, and most importantly, enticing to their original clutch of fans. (Dave Cantor)