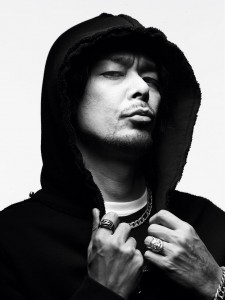 DJ Krush, a Japanese DJ and production guru, said late last year in an interview with Time Out Tokyo that he doesn’t think the new music he’s making is hip-hop. While the man’s name is indisputably linked to the genre, it’s difficult to refute his statement after getting an earful of his latest clutch of singles. The recordings, “Koufu no Tsubasa” specifically, hedge toward grandiose soundtrack music, pulling more from Japanese culture than Brooklyn. His latest releases, though, can’t undo the work Krush has issued in the last twenty years. And it’s those two decades worth of recordings bringing Krush to the States on a celebratory anniversary spree. “Meiso,” a sixteen-year-old album, was delivered as the producer’s proper introduction to the States’ hip-hop audience. Tracks featuring vocal contributions seemed to more concretely ape an American tone. But “OCE 9504” and its ilk teetered on the brink of Continental down-tempo efforts from Kruder and Dorfmeister or its later Peace Orchestra offshoot. Assimilating sounds from other cultures would only sate Krush for so long. And while he saw fit to title his 1996 album something distinctly Japanese, the music didn’t necessarily reflect his upbringing. A 2001 disc, simply titled “Zen,” better included Krush’s own culture and counted a gentleman named Boss the MC who raps in Japanese over a beat that isn’t wholly detached from hip-hop’s American conception, but it’s a beat that uses its jazzy samples in a way that seems more ambient and melodic than rhythm-focused. There’s no telling what the producer’s bound to spin at the Mid, but considering that the man was able to pull in DJ Shadow, C.L. Smooth, Black Thought and Malik B for guest spots at various times over his career speaks to Krush’s talent and his ability to craft music for a wealth of scenarios. (Dave Cantor)