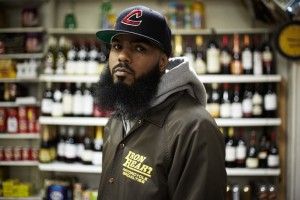 You’d probably be able to buy a physical copy of “Lincoln Way Nights (Intelligent Trunk Music)” without too much difficulty. But Stalley, a Massillon, Ohio MC, is a distinctly digital dude amid a clutch of artists signed to Rick Ross’ Maybach Music. Releasing the aforementioned mixtape-cum-physical commodity late last year consolidated Stalley’s hirsute momentum. The bearded Midwesterner’s turned the hype surrounding that release and his association with some millionaire rappers into high expectations for his pending release—“Savage Journey to the American Dream.” Referencing the subhead of Hunter Thompson’s 1972 “Fear and Loathing in Las Vegas” is a bit odd, but the immediacy of the author’s writing and its unfortunate contemporary applicability should bolster Stalley’s recording when connections are necessitated. Over his pair of mixtape releases, the MC’s made it clear that his own writing’s meant to simultaneously excise personal demons, as well as negotiate current societal problems–whether the society happens to be hip-hop, the nation or just Massillon. As “Savage Journey” approaches release, Stalley’s taken to issuing tossed-off samples of the album and a few videos detailing some of the behind-the-boards machinations going into the digi-disc’s completion. “God’s Child” was released, along with a few other clips, to give fans a hint at what “Savage Journey” was going to sound like. Stalley immediately makes clear that despite substantial backing and sizable hype around his upcoming release, he remains conscious and rooted—he references Huntsville, Alabama, a town his producers hail from. Opening “Blue Sky Freestyle,” another album preview, is an oddly placed recognition of Common’s stature in the genre. The production, here as elsewhere in Stalley’s limited oeuvre, hedges toward an updated and concertedly digital Native Tongues’ vibe. That may be a condemnation, but it might also just be Stalley trying to retain his identity amid his Maybach cohort. (Dave Cantor)