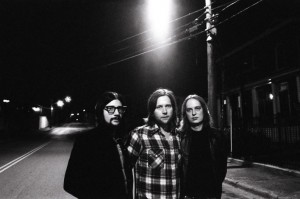 During the mid-to-late nineties, in pretty much any Midwestern town, there was a significant chance of happening upon an as-yet-undiscovered White Stripes—along with groups like the Gibson Bros or The Soledad Brothers—trudging around rock clubs, dishing up garage revival steeped in blues. If not for Jack White picking up on The Greenhornes, and incorporating some of their players into his lifeless Raconteurs project, most folks wouldn’t be privy to the Cincinnati group’s mixed bag of borrowed Stones licks. Witnessing the band during its first phase, before taking a break to tour with White and reconvening for a 2010 disc, The Greenhornes were a substantial draw despite their inability to hook up with a heavy to issue recordings. “Dual Mono,” the Ohioans’ last album before taking that eight-year break, found The Greenhornes roiling in classic-rock influences. With all the Keith Richards- and Pete Townshend-styled rockers, hitting “There Is An End” in the middle of the disc is something of a revelation. Granted, the band wasn’t disengaged from the lighter side of garage, but pulling in a lilting-voiced femme guest vocalist adds a surprising textural shift—something The Greenhornes rock cohort might not have all been able to pull off. Of course, earlier efforts hinted at the ensemble’s ability to slow things down, and on its self-titled disc from 2001, “Stay Away Girl,” the band channels a bit of Jim Morrison, minus all the pretense. Stock and trade for The Greenhornes isn’t just copping their ­pre-“Nuggets” heroes, it’s emoting through all those simple gestures. That’s what White heard in the group, and explains why he’d pull these players in for recording. That 2010 reunion disc “Four Stars,” —or however one should pronounce “****”—might get bogged down in slowly paced seventies-era radio rock, but revved-up garage’s still a part of The Greenhornes’ DNA. (Dave Cantor)