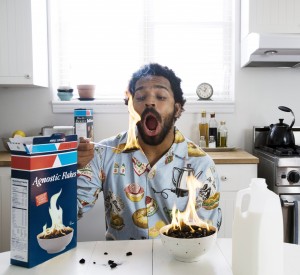 If you toss on the right disc, and wait just long enough, Busdriver raps. And when he raps, hip-hop’s full promise is realized. But only for a few moments. Since the beginning of his career, the SoCal MC’s swayed back and forth between an updated digital boom-bap and works that rank as electro-pop. Over the course of “Memoirs of the Elephant Man” and “Temporary Forever” most of American culture’s taken to task, with a few tossed-off songs touching on relationships included for good measure. The MC’s collaboration with various Project Blowed performers, though, helped nab some attention for those early discs. And by the time Busdriver recorded as The Weather with Radioinactive and Daedelus in 2003, the MC had solidified his oddly pitched and uniquely syncopated flow. It’s not that Busdriver’s the fastest rapper on the planet, but on “Unemployed Black Astronaut” he’s able to mention Miles Davis’ “Bitches Brew” in one line and reference thirst on the next. During the first half of his career, the performer benefited from the support of imprints like Mush and production from Prefuse 73. Signing with Epitaph didn’t seem to reign in Busdriver’s more bizarre proclivities—they were just given more time to gestate in better financed studios. The 2009 “Jhelli Beam” disc details the MC trying to settle into beats contributed by Project Blowed luminaries, but set in pop terms. “Beaus$eros,” Busdriver’s recently issued sixth full-length, sounds more focused–“Ass to Mouth” being particularly notable. Tracks making it clear Busdriver has a library card are still abundant; the mocking “Picking Band Names” goes so far as to name James Joyce. But there’re still a few moments when it’s evident Busdriver isn’t completely satisfied with past triumphs and aims for new sonic pastures. “Scattered Ashes” closes “Beaus$Eros” with some crooning and interspersed with an occasional rap–musically it’s strong enough to be part of a Pepsi commercial and lyrically troublesome enough to be censored. Maybe that’s the balance BD’s searching for. (Dave Cantor)