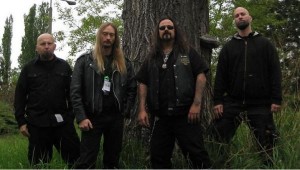 This is some seriously disturbing music. And as all music goes, listening to Florida’s Deicide is best suited to a unique time and place. For metal of this particular caliber, the ideal scenario might be a worked-over pickup truck, speeding down some narrow road at inadvisable speeds. The music’s pace might demand such an extreme, but it might also be some evil ju-ju unloosed by listening to songs about God’s dismissal. Sure, we’re all skeptical at times, but Glen Benton, the band’s singer and bassist, doesn’t even go in for some exploratory discussion. He gets right at the crux of it and says, “Died for me, well that’s too bad, I don’t believe,” on the band’s first album during a song titled “Deicide.” What’s interesting about that 1990 effort is that after dismissing biblical tales as fiction, Benton goes on to grunt, “Killed by sins of the evil what I am…” You can’t have it both ways. But deep thought and metal aren’t necessarily sought simultaneously, so a twenty-year-old song being a bit garbled isn’t a big deal. That first Deicide disc, while useless as an instructive guide to proper hate, allowed for a bit of improvement. And by 1995’s “Once Upon the Cross”–no, these guys don’t believe in what your priest is laying down–the band seemed to have undergone substantial rehearsal time, as tracks like “Christ Denied” find the ensemble sounding as if it was incapable of dropping time, or hitting the wrong note. The smug “To Hell with God” was issued last year and finds Deicide only slightly updating its sound–“Conviction” comes off as a bit more mathy than what might have showed up on earlier albums. But it’s still music that would be upsetting for neighbors to hear late at night. And moreover, difficult to listen to early in the morning—unless it’s overcast. (Dave Cantor)