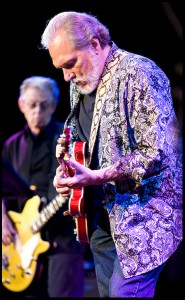 Setting up a residence near the Ohio-West Virginia border seems like a sensible move for Jorma Kaukonen, Jefferson Airplane’s lead guitarist and eventual founder of Hot Tuna with his longtime friend and Airplane bassist Jack Casady. Out there in the boondocks at his Fur Peace Ranch, Kaukonen stages workshops, features guest instructors and has gone so far as to host a music festival to pull in some hippie-college-kid money—Ohio University’s just twenty minutes up the road. Kaukonen’s best-known group was never considered too functional, but Hot Tuna’s been able to persist for decades beyond most other sixties San Francisco groups. Sure, there was a huge break in action, with 2011’s “Steady as She Goes” counting as Tuna’s first studio release since its first chapter coming to a close during the late seventies. That new disc sounds like what it is, though—a bunch of middle-aged dudes, unquestionably talented, but without the imperative to create something lasting. Your stoner uncle would probably like it. Regardless of Hot Tuna’s most recent recordings, the band amassed a significant fan base on the back of Kaukonen’s bluesy pastiche of rock and roots. Always ready with a Reverend Gary Davis cover, Tuna’s first few albums develop from the guitarists’ rural styles and eventually incorporated a bit of the Airplane’s acid vibe. Tuna’s second album, the 1971 “First Pull Up, Then Pull Down” found the ensemble expanding to include more than just bass and guitar, edging toward a full rock sound as heralded on its closer, “Keep Your Lamps Trimmed and Burning.” A Davis original, but developed here as something of a boogie workout, Papa John Creach jams on violin, summoning Zappa’s “Directly from My Heart to You”–just not as wild. Hosted by the Old Town School of Folk, it’s unlikely Tuna’s gonna get too raucous, but Kaukonen’s guitar playing in any setting’s enough to hold an audience’s attention. (Dave Cantor)