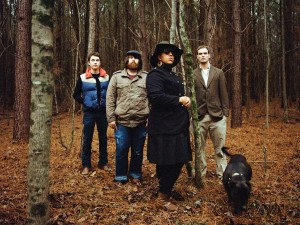 Only comparing The Alabama Shakes’ lead singer, Brittany Howard, to other female vocalists doesn’t exactly cut it. She actually winds up sounding like Creedence’s John Fogerty as frequently as anyone else. The remainder of the quartet doesn’t stray from would-be swamp music, either. That bluesy nonchalance is just gussied up by a requisite dose of southern soul and straight rock sounds—Stax and Muscle Shoals Studios are within easy driving distance of the band’s hometown. Hailing from Athens, Alabama, a city just about two hours south of Nashville that sports a rusted-out rocketship along its corridor on Interstate 65, the closest cultural mecca is probably Huntsville, a college town made prominent a few years back by an on-campus shooting. It’s interesting that the Shakes embrace such a dusty batch of influence, skirting sixties psych, but still becoming endeared to the garage set in addition to their core rootsy audience. But being removed from a specific music movement, and perhaps more importantly, big city concerns, the Shakes are already renowned for their live performances. Picking up the ensemble’s self-titled single from last year depicts an act issuing a joyful noise that clearly comes off best with an audience, even as the recording reveals a band comfortable with itself in a way mostly reserved for veterans. Constant touring–the band’s in Europe ahead of its Chicago date–seems to have helped cultivate a considerable following at this early stage of the band’s career. Digital dissemination on fan-sites, music blogs and video-hosting servers have helped get the word out, even as the Shakes have yet to issue a long-playing disc—”Boys and Girls,” though, is in the offing. The strength of the Shakes’ four-song release ties up enough reinterpreted, instead of reimagined, soulful American music to make the band the Internet’s next big thing. We’ll see if this one sticks. (Dave Cantor)