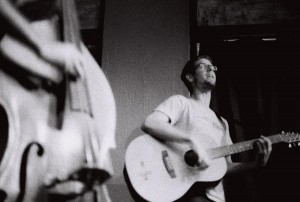 Andrew Jackson Jihad wrapped up criticism pretty succinctly on its 2009 album, “Can’t Maintain.” A track called “We Didn’t Come Here to Rock” proclaims “If that’s what makes your dick hard/Telling people they’re bad at making art.” The band delivers its message over hamfisted bar-chords at a pace best suited for high-school punk bands. And singer Sean Bonnette does the whole thing in a voice sounding more full of medium-roast coffee than booze. Dismissing all the negativism associated with a commentator’s craft works back to punk’s impetus, though—if you want to do something, do it. Even if it sucks. Luckily, Andrew Jackson Jihad hasn’t incurred such jabs. The Arizona ensemble, which includes a number of players at any given time contributing mandolin or kazoo, is jacked into a late-nineties punk network despite toting around its acoustic instruments. Releasing work through Asian Man Records, a label run by Skankin’ Pickle’s Mike Park, ties AJJ into a community that includes an acoustic-guitar-wielding Kevin Seconds and Kepi Ghoulie, of 7 Seconds and the Groovie Ghoulies, respectively. The same sort of energy embedded in those acts’ recordings is readily apparent in Bonnette’s nervy warbling. Exploring the possibility of various pacings, though, turns what could be just a fast rock disc, like last year’s “Knife Man,” into a musically varied exploration of America’s social and political standing. Switching from slower acoustic-based fare to the almost Ramonesy “Distance” isn’t jarring given the lyrical consistency the band writes with. Even if the track opens with lines leading a listener to figure the effort as another love song with attendant narrative, there’s enough supplemental discussion of society to connect everything pretty easily. A full band setup’s scheduled for AJJ’s Chicago appearance, so there’s bound to be more quickly paced fare than slow and clever. Both approaches seems to work for the band. (Dave Cantor)