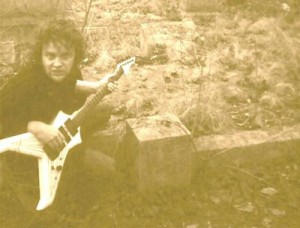 During time in his various bands—The Functional Blackouts, The Daily Void, Mickey—Mac Blackout’s gone from the furthest reaches of drugged-up punk to synthy derivations, on to glam and now back to something resembling punk in its earliest incarnation. Working up FB’s “The Severed Tongue Speaks for Everyone” provided a glimpse at Blackout’s grimy vision of the world and what music should soundtrack its downfall. The album won’t wind up a classic, but the recording’s devotees would understand if a broad reverence developed. Drifting through any number of bands, Blackout eventually landed an ensemble he dubbed with his own name. The Mac Blackout Band initially issued a Spanish-pressed long-player, which encompassed most of Mickey’s glammier intentions, but doused the proceedings with some alien-sounding keyboards, swirling around while Blackout sings love/hate songs. A few tracks take up the mantle of weirdness, but that’s rarity more than it is a rule. There’s nothing regrettable, just nothing gripping on that earlier effort. Judging from a newer spate of demos MBB’s namesake posted digitally, the band’s moved closer to punk’s primal pedigree. Comparing “Red” to Jay Reatard’s “My Shadow” seems reductive. And it is. But the same sort of robotic drumming propels each track, and Blackout’s vocals veer toward tuneful during the song. For raving up such a squalid storm in the company of his earlier ensembles, Mickey notwithstanding, Blackout’s latest group weds some surprisingly melodic moments to the specific strain of rock stuffs to which the frontman’s devoted himself. “Life is Hard” speaks a simple truth, but could really be saying just about anything as long as that sharp descending three note guitar figure keeps cropping up.  (Dave Cantor)