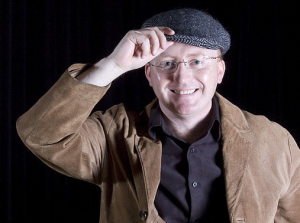 Paddy Homan is an Irish tenor from the County Cork. He spends his days working and studying and performs in the evenings. He will be doing concerts every day in March, including a performance on Windy City Live on St. Patrick’s Day, but he took some time out to talk about being a modern-day Irish immigrant, his experience with making music in Chicago, and a bad case of appendicitis.

Give us a little background on who you are and what you do in terms of making music.
Well, I am a native of Cork City Ireland; moved from my native city to Chicago about five years ago. I suppose my life has been a series of accidents. I came to Chicago by accident to visit a friend of mine, and I ended up coming back here to study social work. I thought Chicago was the greatest spot to be doing both my day job and music. And I’m getting closer to having just one career and that’ll be a combination of both.

Chicago is steeped in Irish music and history. And coming out here joining the Irish musicians and playing regularly and putting it really at the service of people. Because that’s the real message of music—that community-gathering of people, gathering of strangers who never met each other and suddenly they’re connected through the music.

When you first came over to Chicago was it your intention to make music?
I think I always kind of knew I might come out to America; I didn’t know exactly where. In Cork I was actually studying—I did a little bit of music, the odd concert here and there, but I never really got involved in Irish music. I did most of my music sitting on the banks of the River Lee fishing, singing and pondering.

Do you ever have this sense in the back of your mind?  I was always thinking “someday, someday” I’m going to go out there, and it never actually happens, and then suddenly you reach a point in your life and you feel now’s the time, now’s when I’m going to go out there. I had a few ideas but I didn’t know how I planned to go about it. But so do all the millions of immigrants who come to America. And that’s the beauty of coming to the US, this being Chicago the city of big shoulders: If you have ideas, well you can do whatever you like, provide that no one gets hurt.

As someone who’s around US citizens of Irish descent here in the US now, how do the people who are “Irish” here compare to the folks who are back in Cork?
Good question. I’d take the question maybe one step back and say, how did I look at America before I came out compared to now. You have to remember I came out in the Bush era and people said, “Look you’re mad giving up a government job to come out to America and look at how things are.”

I said, “Look, I’ve got to take this chance.” I came out here and you meet second-, third-generation Irish Americans—and not just Irish Americans. You meet people from all different cultures, and specifically in the Midwest there’s this culture of people being hospitable and wanting to help you.

It catches on, rubs off on you. And people say “Do you know this person back home?” Of course you don’t (Laughs) but you get a sense of the localism that still prevails. Chicago is a big city but it’s still a small town too.

An example of that is, I was asked to come onto this Windy City Live show (March 17). A fellow by the name of Bill O’Reilly who knew me from the Easter Mass at the Irish Heritage Center, Bill apparently said to his daughter last year, “If I ever die I’d like for Paddy Homan to sing at my funeral.” Well, Bill died a few months ago and I got a frantic email saying, “Will you sing at this funeral?” Apparently that day one of the things he said was “You won’t forget to get Paddy Homan to sing at my funeral.”

So of course I work, and I said I need to make sure I can get the day off. I wrote to my boss at Lutheran Life and they said, “You need to go. You need to be with that family.”

I went to Hoffman Estates to see the family. The casket was still open so I said hello to Bill and I said goodbye to Bill. And we gave him a proper Irish sendoff.

And lo and behold Marilyn, the woman who contacted me, talked to the producers of that show and now I’ll be performing there. And it’s not so much the message of me going on that show but it’s the message of the hidden gems. The compassion of the people I work with and the hidden connections between people. That’s the linchpin for me, to use your music at the service of people. 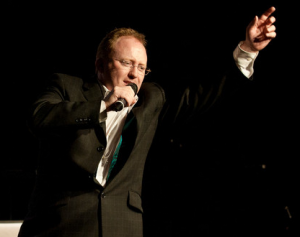 Even in a city of millions of people there are these communities of people who take care of each other.

And I must say that I’ve been on the recipient end of that.

I was performing at the Galway Arms—we play a session there every Sunday from 8pm to 10pm. I remember I had been playing a lot that weekend, and I was playing and I had a bottle of cider at my side, I usually don’t drink when I’m performing, but I had a bottle of cider. So, I was hammering the bodhran away, and I never get tired when I’m singing or playing music, ever. But on that occasion I started to get a little dizzy. I said to myself, “That’s strong cider.”

But of course I got home, didn’t feel too well. I was living on my own, got dehydrated, turned out I had a ruptured appendix. I needed an appendectomy and I was six hours away from disaster.

I was out of work for a while. I had just bought my house, and I couldn’t even put on my socks. I remember, one day shortly after, sitting in my chair, it snowed six inches that day. The only thing I had in the house was enough milk for a cup of tea. And I get a call from my good friend Maureen O’ Looney. “Open up the door there’s a guy coming over,” she said, and so I went to the door and there was a guy with his son from Cavan in Ireland. He always listened to Marlene and I on the radio and he came over to shovel my snow. He came over to bring me breakfast, and he sat down we had a cup of tea.

I was so close to going home. I was at my wit’s end, lucky I had health insurance. He said “Ah sure Paddy, we love hearing you on the radio. You better stay for a while.”

And that is very different from back home. There’s a different sense of community back home. But when you think of all the things people do for each other all the Irish benefits and everything.

And I got a call from a guy Jerry and they were going to organize a benefit for me. And I told him well, I have health insurance and I’m all right. But it just goes to show you all the people who are thinking of you and looking out for you.

All you can do is pass it on.