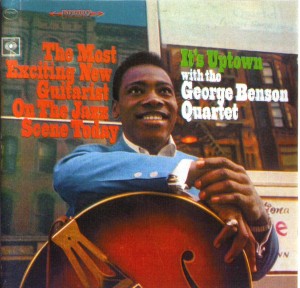 It’d be easy to say George Benson heralded the commercial jazz one might hear at a dentist’s office with all his smooth seventies fare. On those albums, the guitarist and singer still managed to include some incredible musicians in his work. Ronnie Foster, whose composition “Mystic Brew” formed the basis of a pretty memorable A Tribe Called Quest track, contributed to Benson’s 1976 “Breezin’.” Your unhip uncle’s got that one in his collection. But prior to all that, Benson paired with Brother Jack McDuff for some funked-up jazz and then headed off with a quartet for the 1965 “It’s Uptown.” While the guitarist’s inclination to sing begins cropping up here on occasion—his rendition of “Summertime” being one of the song’s lesser incarnations—most of the disc could be considered genre-defining. On just the first side of the album, Benson turns in an imaginative version of “Ain’t That Peculiar” and his own “Jaguar,” the latter being something Soulive would envy. That was all a pretty long time ago, though. His work since the sixties has veered toward pop concerns just as often as it has had a traditionalist’s sense of the genre. “Guitar Man,” his latest album, opens with an emotional, solo rendition of “Tenderly.” Amid all the singing and smooth-nonsense he’s levied on the listening public, it’s invigorating to hear Benson emote so clearly and so simply. Unfortunately, the following track decimates a Lennon/McCartney composition, and Coltrane’s “Naima” is eviscerated a few songs on. There is less of a vocal focus on “Guitar Man,” Benson better balancing his disparate crafts here. But track to track, this disc, like so many of his other recordings, is a frustrating listen—being reminded of his greatness and then let down by the man’s torrid love affair with his own wide-ranging interests. (Dave Cantor)