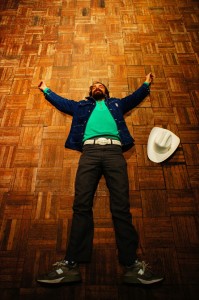 Wayward Southern singer-songwriter Jonny Corndawg has the awkward task of performing country music and trying to disseminate its sounds to citified listeners under the age of forty. Born in Virginia and rambling around the world for the better part of the last decade hasn’t resulted in the singer’s wide acclaim. But ditching Nashville for Brooklyn has served to introduce the singer to a different swath of the listening public. Hooking up with Dawes and Deer Tick for various recording and touring concerns hasn’t hurt, but with such a purposefully difficult moniker, some would-be fans might initially be put off. Taking a listen to his Kickstarter-financed “Down on the Bikini Line,” though, reveals a performer able to summon his country heroes while accidentally working in enough of Dylan’s “John Wesley Harding” and “Nashville Skyline” to sate adherents to any manner of country’s derivations. Regardless of the questionable stage name and desultory album title, Corndawg went and issued an album with a string of tunes catchy enough for anyone to whistle. “Dog on a Chain” gets all creepy as Corndawg’s joined by a female vocalist in some bizarre update to Wagoner/Parton recordings. It’s all troubled times and difficult situations, but in Corndawg’s tenor, which trembles at either end of its range just enough to know it can’t be stretched any further, hearing about dogs, bears and nosy fathers is a simple pleasure. The instrumentation, while not too varied, is just this side of impeccable. The only real criticism that might warrant mention here is that the last several tracks from “Down on the Bikini Line” aren’t much more than filler. Country in a live setting, though, is frequently energetic enough to get over. Sheeeit! You can even buy a leather gee-tar strap, handcrafted by Corndawg, on his website. (Dave Cantor)