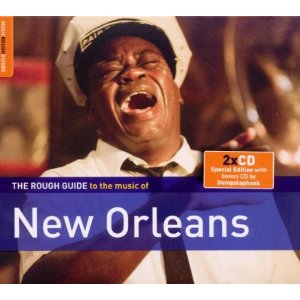 Since the inception of jazz, New Orleans has given us an almost infinite number of great musicians, from Louis Armstrong to pianists Harry Connick, Jr.  and Dr. John, from bandleader Kermit Ruffins to the Marsalis family—artists who have distinguished themselves in various musical genres. On this collection from the Rough Guides, we get a sample from both the new and more well-known musicians.

The disc kicks off with “Ooh Poo Pah Doo,” a classic soul-driven track from Jessie Hill that sounds like an early Neville Brothers track, with lots of screamed vocals and a cool guitar-based arrangement. But what really gets the album cooking is the selection of Mardi Gras party tunes from Ruffins (“Treme Mardi Gras”), The Hot 8 Brass Band (a different take on Marvin Gaye’s “Sexual Healing”) and Professor Longhair (the rollicking “Big Chief”).  Also notable are “When You Get Back,” a Latin-flavored tune about heartbreak involving a long-distance relationship from John Cleary  & The Absolute Monster Gentlemen and Los Hombres Calientes’ laid-back “El Barrio.”

“The Rough Guide to the Music of New Orleans” also includes a bonus EP from Dumpstaphunk, a band led by Ivan Neville (the son of Aaron Neville).  It is a great showcase of the funky sounds currently made in Crescent City–the music gets you moving from “Shake It Off” to the “Living in a World Gone Mad,” a poignant  tune that looks at the problems around the planet, from school shootings to the poor left for dead in the aftermath of Katrina. (Ernest Barteldes)