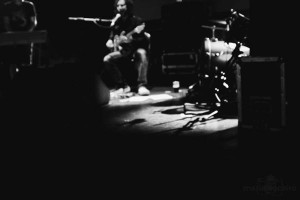 What the eponymous Beak> album issued in 2009 seemed to be advocating was that finding a groove within a rock context can mean just about anything. The trio, made up of members tied to the Invada imprint, spawned as a result of some impromptu jams helmed by Portishead beat miner Geoff Barrow. Best known for languid downtempo matched to femme vocals smooth as they are calm, the producer seems nimble enough to work in any sort of repetitious composerly form. “Battery Point,” from Beak>’s first release doesn’t go anywhere melodically. But the narcotic pounding of the whole thing doesn’t need to have a point, contrary to the work’s name. It just ambles through a few different sections with an almost indecipherable guitar figure guiding the whole thing along. To properly gauge the breadth of what Beak> lays down, get ahold of the track “Ears Have Ears.” While it sounds like a Pink Floyd outtake, there’s enough wobbly bottom end to hold the shambolic noises floating atop the rhythm section together. Following up the ensemble’s first release, “Wulfstan” counts a few live renditions of the band’s songs in slightly reimagined terms. It’s hard to find fault with a collection of music that so clearly aims at being unobtrusive as possible. Quickly paced numbers from that self-titled disc, “I Know,” even come off as easy-to-digest grooves. Apart from the music being just short of impeccable when compared to like-minded acts, Beak> doesn’t generally find itself booked into huge clubs. This Chicago date’s no different and should provide that last bit of convincing necessary to take in a live show. While clearly a busy guy, Barrow’s slated to issue a completely unrelated Stones Throw project by the end of the month regardless of the fact that this Ultra Lounge set counts as a release party for a new Beak> recording. Catch him before he’s off into another genre. Again. (Dave Cantor)