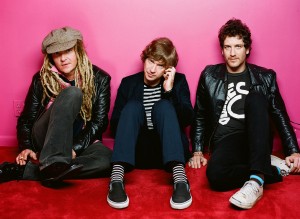 Reframing the career Nada Surf’s survived usually goes something like this: The band had a hit, got screwed over by the recording industry, hooked up with independent labels and began issuing its strongest work. Well, that’s an appealing narrative and as accurate as anything else one might read about the New York trio. But what’s interesting about Nada Surf’s music, its perspective and how it’s all been understood by the broader culture is that the ensemble’s brief above-ground success gets tossed aside. But going back to the troupe’s 1996 “High/Low,” which owes its visual aesthetic to the same pool of influence that every Sub Pop band was gazing into, it’s difficult to dismiss the melodic intentions splayed out during “Treehouse.” That sort of nineties rock sensibility slithered its way into a lot of minds who found Sonic Youth’s more succinct moments charming. Nada Surf doesn’t ever eschew basic song structures and certainly not western melodic ideas. But with enough punky gesturing, just about any pop song’s got a shot. And “High/Low” has ’em in abundance. Of course, the requisite jabs at Hollywood date the disc to the band’s early days. Simple and effective basslines like the one bolstering “Psychic Caramel,” though, should wash away any of the disc’s perceived shortcomings. A handful of albums—and a few more disappointments on the business end of things—followed. This year “The Stars are Indifferent to Astronomy” was released through Barsuk, positioning the band as a road-tested touring act and one with further-developing songwriting skills. The trio even wrote a track called “When I was Young,” which may have been a better collection of sentiments than a song. Hearing Matthew Caws’ voice round out over time allows for Mod-esque “Jules and Jim” to come off better than it would have sixteen years back. Unfortunately, referencing Truffaut films in song is a sure way to seem like an aging band angling at intelligence. (Dave Cantor)