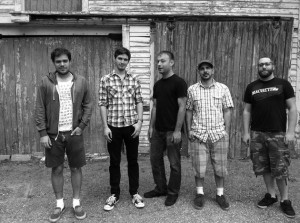 If this is the worst thing that ever happens to punk, all involved should be thrilled. Bomb the Music Industry! proclaims it’s a collective, not a band. And yeah, that’s kinda like being vegetarian, but qualifying it by saying that eating fish, sometimes, is alright. But BtMI has been issuing music for around seven years, doing it on a steady basis and touring enough to cultivate a fanbase engaged with punk, third wave ska and any manner of goofier indie-styled rock stuff. During the band’s development, there has been a significant expansion of its sound–even if there was always a certain updated righteous folk thing at work. Seating the approach within a musical trough filled with lyrics about being a slacker hasn’t hurt either. And somehow, “Unlimited Breadsticks, Soup and Salad Days,” with its odd polka rhythms, seems to work when included amid scum-punk screaming and reflective lyrical condemnations of one’s own actions. Yeah, a huge portion of the ensemble’s lyrical focus is about being a slacker–its latest disc, “Vacation,” expands that tremendously. But the music’s changed pretty dramatically. On the 2006 “Goodbye Cool World,” work like “My Response to an Article in Alternative Press” relies on group-shouted choruses as much as it does on occasional keyboard flourishes. Even when BtMI aims at a bit of serious commentary, the group’s sure to add in some comedic relief. Maybe that’s why seven years doesn’t seem like a long time for the band to have reached the maturity displayed on “Vacation.” But since the whole of BtMI’s catalog sounds like a collection of baroque Op Ivy demos made by Chocking Victim within the last several years, the band’s circle of influence is bound to expand and evolve. (Dave Cantor)