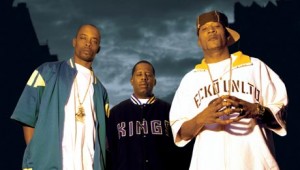 Brand Nubian was—and remains—an understandable extension of critical views expressed by DeLa, Gang Starr and any number of other East Coast ensembles, dating to the late eighties and early nineties. The trio, which existed in its first phase just long enough to issue 1990’s “One for All,” did its damnedest to relate the collective’s religious views explicitly. What made tracks like “Ragtime” so memorable is that the beat sounds positive enough to negate any casual mention of Farrakhan. The radical political stance—in terms of mainstream performers, at least—Brand Nubian fully embraced after Grand Puba’s exit ahead of 1993’s “In God We Trust” relegated the effort to low-key classic. Musically, the disc fit in with whatever Tribe track wound up on radio stations at about the same time. With Sadat X directing the group’s lyrical content, though, there wasn’t too much hope for broad exposure. “Pass the Gat” includes the much-discussed line, “Shoot a faggot in the back for acting like that.” What gets glossed over, though, is that the same horn sample was used on Digable Planets’ “Reachin’ (A New Refutation of Time and Space),” released seven months later. Sure, there’s a good chance each group was unaware of the other’s use of the sample. Even if that’s the case, though “What Cool Breezes Do,” from that DP disc, follows such a dramatically different editorial path that the chasm between recordings illuminates the inexhaustible possibilities in hip-hop’s blueprint. Beyond Brand Nubian’s notable production values, all involved know how to handle the mic. And to hear Brand Nubes’ earliest work, contrasting it with current performers, there’s really only one conclusion to draw: The genre is not amid an artistic high-point. (Dave Cantor)