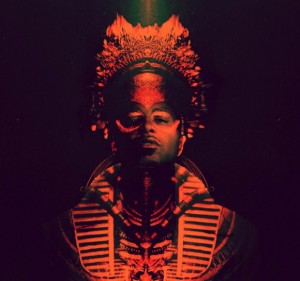 This is hip-hop like The Last Poets were a rap group. Shabazz Palaces, comprised of Ishmael Butler (formerly of Digable Planets renown) and Tendai Maraire, don’t so much make music restrained by the genre as the pair solders together a whole buncha sparse rhythms, runs it through a new millennial grit and tops it off with artful wordplay. “Don’t compare my beat with his,” Butler says on the opening track of Shabazz Palaces’ first long-player. Since a huge portion of the duo’s work, including last year’s “Black Up,” sounds musically akin to anyone from A$AP Rocky to Dabrye, it’s tough not to. Productions tend toward slower tempos, simple bass-drum patterns and enough empty space to allow for Butler to unwrap a story or an idea. What’s funny, though, is that his voice frequently sounds just about the same as it did during DP’s nineties heyday. Waiting just long enough, listeners can pick out Butler’s phrasing on “A Treatease Dedicated to The Avian Airess from North East Nubis” sounding like it’s based on DP’s “Where I’m From.” Given the verbosity of that song’s title, it’s easy to figure there’re a few moments when the entire affair turns into a futile exertion of intelligence. Just thinking up a name for something like “Endeavors for Never (The Last Time We Spoke You Said You Were Not Here. I Saw You, Though)” may have taken longer than some MCs spend on an entire verse. Butler’s reliable ability on the mic makes even the lesser moments here palatable. “Recollections of the Wraith” is pretty tame musically. But over some of the disc’s most sparse production, the performer formerly known as Butterfly describes someone getting off a space ship as being “dipped in punctuation.” That alone’s worth further exploration. (Dave Cantor)