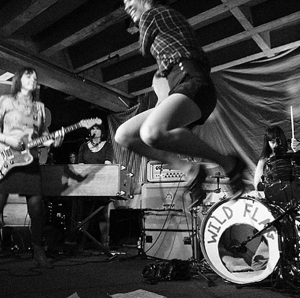 This could still have been on Kill Rock Stars. Or K Records. Wild Flag, comprising folks listeners may know from Sleater-Kinney, Minders or Helium, showed up last year with a self-titled disc a number of critics dumped onto year-end “best” lists. Some of the excitement revolving around this ensemble was due to nostalgia, but a few moments on the group’s disc bear out the fervor. “Future Crimes,” which was released as a single, really comes off as a vintage slab of seventies-style Brit punk—accidentally or not. The vocals don’t sound forced and the supplemental “Ohhs” and “Ahhs” actually add a bit of depth to the entire affair.  Most albums include a few clunkers. And “Wild Flag” isn’t any different. “Something Came Over Me” is pretty troublesome. Letting the good times roll is well and good, but using the idea as a refrain isn’t. At least all those “la-la-las” make the track a bit easier to take in before “Boom” kicks in, sounding like it’s being delivered by a vampire, accent and all. Each composition exhibits a melodically adept ensemble, but some of the sentiments being expressed drag down the music. “Electric Band”’s a crap shoot–musically, it gets over. But the chorus sounds like it’s been plucked from a children’s album. So, combining the two makes for troublesome listening, which kinda sums up the entire disc. The momentary lapses in musical acuity sprinkled in during the course of “Wild Flag” unfolding only makes bands like Grass Widow (and sure, fault me for citing another all-femme group), which can pull off proper harmonies amid some tricky instrumental passages, seem like a big deal. Realistically, Wild Flag could be atrocious–and it’s not, to be sure. Even if it were, the group would still pull in a decent crowd based on the historical significance of its principal players. (Dave Cantor)