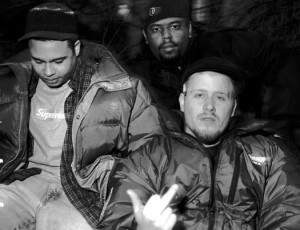 It took Company Flow less than a decade to become a mythic collective. When the trio–El-P, Bigg Jus and Mr. Len—dispersed in 2001, it had only amassed a single long-playing album, a collection of instrumentals and a handful of singles. 1997’s “Funcrusher Plus” went out of print pretty soon afterward as a result of Rawkus, the imprint that issued the recording, going belly up and the disc should have obscured CoFlo’s influence. It didn’t. Instead, it became something of a requisite study guide for everything that made East Coast hip-hop, in its underground guise, substantial. Of course, El-P continued recording and touring as a solo act. And while the 2002 “Fantastic Damage” disc was an impressive statement—songs like “Deep Space 9mm” and “Stepfather Factory” should be canonized—there was a new sort of fury El-P was expressing that made his newer work just subtly less digestible. “Funcrusher Plus” wasn’t hemmed-up and restrictive. But El-P seemed more interested in writing and rhyming than dismay and disappointment with everything around him. “Legends,” from the CoFlo long player, shuffles together some Kool Keith samples and an Elmo snippet. The song’s still a nervy condemnation of lesser MCs, but it’s soldered together with the finest parts available, making the effort a new(er)-school recording dissecting its own cohort. Whatever the subject matter, El-P overshadows his company. It can’t have been planned. But with such overwhelming vision, the MC was bound to be the feature in any group. “8 Steps to Perfection” doesn’t detail how to attain this man’s talent—he even acknowledges, “We can’t all be pimps/We all can’t rap.” And he’s right. Qwel and Maker open, because no one wants to follow Company Flow on stage. (Dave Cantor)