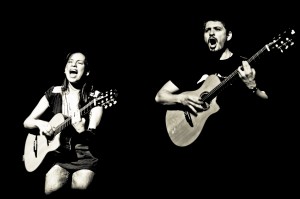 It’s an unlikely back-story: metal enthusiasts hone an appreciation for Spanish flamenco, head to Ireland and hit it big, relatively. But over the last several years, Rodrigo y Gabriela have toted around a pair of nylon string guitars, taken a music rooted in the past and served it to a new audience. The Mexican duo of Rodrigo Sánchez and Gabriela Quintero don’t play the music exactly as fans of the genre might imagine–and they stray from the psychedelicized version Peter Walker touts. Working in Led Zeppelin and Metallica covers isn’t the norm for most acoustic acts. But hearing Rodrigo y Gabriela dispense both during a 2006 self-titled effort makes sense. As long as there’s a substantial melody to play around with, just about anything can be turned into a flamenco. But by the end of the duo’s 2009 “11:11,” which includes tributes to everyone from Astor Piazolla to Hendrix, listeners should sense the genre’s restrictions bearing down on these performers. So, with a handful of live dates recorded and three studio albums in the can, Rodrigo y Gabriela decided to incorporate a different sort of Latin sound. For the new “Area 52,” the pair teamed with a roster of Cuban players to reimagine a few earlier efforts and expand beyond the realm of acoustic guitar dynamics. Opening with “Hanuman,” which also served as the first track on “11:11,” Rodrigo y Gabriela churn out something approximating Santana fronting a huge Latin jazz band. The concept works on its own terms, but won’t necessarily engage fans of the pair’s earlier recordings. Whereas early-career efforts like “New One” displayed the guitarists’ ability to work in sedate terms and move into more aggressive passages, “Area 52” sticks to a single idea. It’s not repressive, but for those more interested in the two performers’ interplay than big band dynamics, this latest tour might be an odd experience. In any setting, though, Rodrigo y Gabriela exhibit some impressive chops. (Dave Cantor)