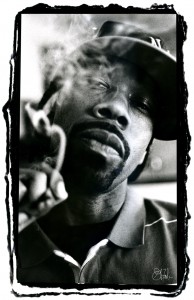 With Bay Area-influenced tracks like “The Motto” currently clotting the hip-hop airwaves, the Pacific grime-infused sounds of Northern California have been hijacked by skinny tattooed rappers from Los Angeles and smooth-talking Torontonians. They cavort and rhyme over the hollow beats and shuffling clicks of their appropriated tunes, following the letter but lacking the menacing spirit. While the snow-leopard print North Face that Drake tools around in is stylish, it far from conveys the ski-mask mentality such beats need. A true taste of the Bay—one as looming and ludicrous as Alcatraz, an island prison protected by sharks, Arkham Asylum made manifest in the real world—comes to The Shrine when Andre Nickatina rolls into town like the fog that made his city so famous. A patron saint of the harder side of San Francisco, Nickatina has been active since the early nineties (under the regrettable moniker Dre Dog), a contemporary and peer of similar artist and close friend Mac Dre. Nicky represents the harder side of San Fran, far away from the Haight and heavily pierced hipster girls and more in line with the fine layers of filth and copious amounts of cocaine usually associated with neighboring Oakland.

Nickatina’s rubbery, juicy voice spins rhymes about selling both kinds of dimes amongst other street stories, intermixed with a vocabulary and syntax that is uniquely his own. He sounds both threatening and campy, like a Beretta painted with polka dots, an indomitable tour guide to a city’s non-romantic side. It is a distinct and memorable voice, hard to describe but becoming the Aristotelian form of a Fillmore sound after one has been exposed to it.
The Shrine stop is part of the massive “Where’s My Money?” Tour, a nationwide burn with Fashawn and Mumbls in support of the recent release of the same name. An endearingly half-out-of-step mixtape which lifts its beats from as far afield as “Rack City” and “Return of the Mac,” “Where’s My Money?” finds Nickatina putting an approachable spin on his dope delivery, like grape-flavored blow or a beanbag riot round; the potency is still there, but delivered with a Queensbury Rules kind of formality. It is an admirable entry in an extensive catalog, and one worth seeing live if only for the chance to see the King Cobra show Tyga how “Rack City” should be done. (B. David Zarley)
April 13 at The Shrine, 2100 South Wabash, (312)753-5700, 9pm, $12 adv, $17 dos.