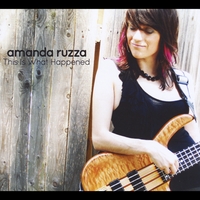 On her debut release as a solo artist, São Paulo-born electric bassist Amanda Ruzza showcases an eclectic mix of jazz-influenced sounds heavily grounded in chorinho, a Brazilian genre that predates samba and has lots of European-based sounds. “Pagão” starts with chatter commonly heard in Brazilian bars followed by a duet between Ruzza and trombonist Chris Stover following the melodic line.

Between solos, the song has a street-samba feel heard on weekends throughout the country that helps the spontaneity flow. “Costanera” goes further north with nods to maracatu and afoxe, two distinct Afro-Brazilian rhythms developed in the country’s northeast. Drummer Mauricio Zottarelli, who has great technique, has chemistry with the bandleader, and they respond quite well to each other’s grooves. “Pimenta no Chôro” begins with more of a contemporary jazz vibe, and then turns into a sophisticated bossa feel.  Also notable are “Gin” and the title track, the latter of which closes the album with a gafieira (dancehall samba) feel.

Ruzza has performed as a session player alongside the likes of Bebel Gilberto, Jason Miles and Simon Katz of Jamiroquai. She is a graduate of the Berklee School of Music, and follows in the footsteps of Esperanza Spalding, another graduate from that prestigious institute. We are sure to be hearing more from her soon. (Ernest Barteldes)

Amanda Ruzza
“This Is What Happened”
(Self released)