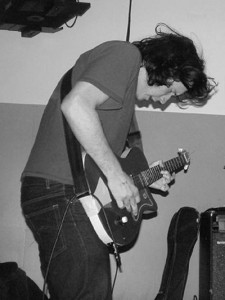 Most folks don’t hear nature sounds amid the sordid fervor of noisy free-improv. But part of the (non-)genre’s intrigue is that listeners are granted the ability to draw any sort of conclusion they wish from a performance or recording. Bill Nace, a Western Massachusetts-based destructo guitarist, has spent the last decade working with a litany of performers who don’t distinguish between melodic perfection and monolithic throwdowns without a script. During his time with Vampire Belt, a duo with drummer Chris Corsano, the pair was able to briefly hint at some sort of understandable melody before flying off the handle into an insular world of successive crashes, bleets and skronks. The group only issued a few discs before moving on to other projects, but that was probably for the best. Extemporaneous music can only be truly of the moment if no preexisting expectations hamper a performance. And playing alongside the same musician or musicians for any sustained amount of time potentially disallows that from happening. So, the guitarist was off to other collaborations–on occasion with Thurston Moore and most recently with the Italian Albert Ayler disciples Jooklo Duo. As a trio, the troupe recently released “Scratch.” Comprising two eighteen-minute improvs, the discs easily slotted into the European’s quickly expanding cache of recordings. Nace approaches the music with one of a few stances during the album’s runtime: somehow mimicking the sound of Virginia Genta’s sax or providing an odd sort of unhinged backdrop for the ensemble to fill out. As a solo performer, though, Nace affects more subtle manipulations of his instrument. He’s something like the John Butcher of guitar, just a few decades younger. Of course, given the nature of Nace’s history, only the evening of his performance will reveal the tack he’ll take when in front of an audience. (Dave Cantor)