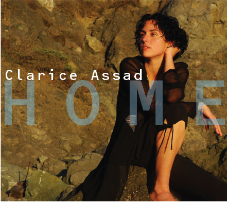 It has been thirty years since legendary singer Elis Regina passed away, so it is fitting that pianist Clarice Assad’s latest release commemorate by opening her new album with “For Elis,” a tune that includes references to some of the late singer’s best-known recordings. The tune has a maracatu feel (a rhythm hailing from Brazil’s northeast), featuring solely piano, voice and percussion. The album recreates some of Regina’s lesser-known hits, such as “20 Anos Blues,” a coming-of-age tune about waking up to realize that time is passing and that it is time to get life on track. Regina’s 1973 version was more into a cool jazz direction, but Assad ups the rhythm with a samba-rock beat and a rollicking Vince Guaraldi-like piano groove.

Assad also revisits other Brazilian standards, most notably Caetano Veloso’s “Cajuina” (the title refers to a popular non-alcoholic beverage made from fermented cashew juice) and Ary Barroso’s “Aquarela do Brasil,” the latter of which was probably the country’s best-known tune before the bossa nova craze hit the United States half a century ago. The album closes with “Falsa Bahiana,” another Barroso composition. Assad sings accompanied solely by a pandeiro, which allows her to exercise her improvised vocal chops.

With “Home,” Clarice Assad continues to assert herself as the gifted musician she is. She makes each cover her own, singing with great swing while accompanying herself on piano with gusto. (Ernest Barteldes)