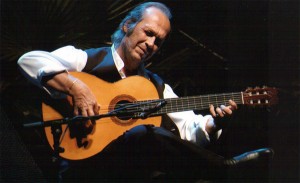 Some folks claim flamenco’s lineage reaches back several centuries. And that may well be the truth. The genre has its canonical figures, and Paco de Lucia is one of them. While the sixty-four-year-old ranks as the music’s best-known contemporary performer, he’s remained one of flamenco’s most explorative composers, conspiring with players engaged with jazz and other sympathetic genres. His ability to inject an adventurous tone into a music with such a long history, though, troubles some traditionalists. Few can argue with de Lucia’s recorded legacy, spanning half a century and including too many albums to readily recall. After issuing several discs alongside Ricardo Modrego, de Lucia’s solo recordings began in 1967 with “La Fabulosa Guitarra de Paco de Lucía.” The album displayed a dexterous right hand, making an already percussive acoustic music that much more rhythmic and varied. Indulgences associated with music birthed during the seventies couldn’t be avoided in the flamenco genre. And in a 1972 disc, “El Duende Flamenco de Paco de Lucía,” de Lucia is supported by occasional strings. While the addition of such orchestration doesn’t do much to squash de Lucia’s obvious talent, the move could have only further troubled his detractors, who refused to allow the aging genre to encompass more modern sounds. de Lucia was still in the early portion of his career, though, and a slew of recordings continued throughout the remainder of the decade and into the eighties. Collaborations continued while de Lucia sporadically released live solo dates. But what familiarized American audiences with the flamenco guitarist was his work with John McLaughlin and Al Di Meola. “Friday Night in San Francisco,” a 1981 recording, finds the trio working as many guitar traditions as possible into a single frenzied composition. The move probably didn’t pull in too many of those traditionalists. But de Lucia’s continued investigation of guitar styles has allowed him to remain a vibrant international figure. His Chicago appearance places him at the head of an octet. (Dave Cantor)