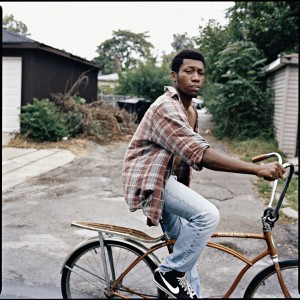 If Daniel Johnston could actually sing and had a penchant for rapping, he’d sound kinda like Willis Earl Beal. As it is, what Johnston lacks in traditional talent, he makes up for with melodic sensibility. It’s not something Beal lacks, but the lesser-known Chicago native deals in such an array of musical  approaches that listeners should have a difficult time fully grasping what he’s aiming for. There aren’t too many albums that can include half-rapped tape-deck jams and Exuma-styled, guttural swamp sounds (Beal’s “Acousmatic Sorcery” was released April 2 via XL Recordings). Sorcery hasn’t ever been so aptly applied to an album title. “White Noise” could be included on some proto-punk compilation and passed off as a song by an open-minded Memphis denizen, struck with rhythm and armed with guitar and regrettably ragged amp—Beal even mentions the Freedom Train. The song, like much of what Beal recorded for “Acousmatic Sorcery,” reeks with despair. Hearing just about any selection from his work, it’s clear Beal records as therapy as much as for the quality of his compositions. Comprised of everything from almost-tuned guitars, oddly pitched stringed instruments and what sounds like a whisk used as percussive time-keeper, Beal’s utilitarian approach to putting compositions together should allow for a slew of songs to follow on the heels of his debut recording. “Letting Go” doesn’t include anything other than a simply syncopated tapping and Beal talking about sticking things up your ass because accolades aren’t really useful. A few moments, like “Evening’s Kiss,” could wind up on the right RomCom and pull in some major loot. Beal can sing. He can write. But from hearing how desperate some of “Acousmatic Sorcery” is, fans’ll have to stick around to see if he can hold it together long enough to craft a significant legacy. (Dave Cantor)