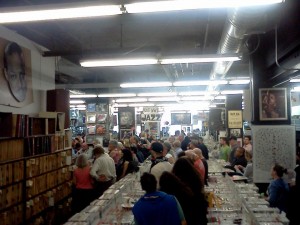 For the past four years, the third Saturday in April has signified more than just the changing of the seasons: it is Record Store Day. Growing steadily each year—with an estimated 300 releases being unleashed this April 21—the event has gone from being a small, niche event to a monolithic enterprise.

It’s a sentiment echoed by other independent record stores, says Saki’s manager Adam Hirzel. “When it first started, it was just kind of, ‘Here’s these limited releases. That’s the reason to come out to your local record store.’ That was kind of it.”

In the time between the first and second Record Store Days, both labels and stores began to see the event had the potential to be more than just another glorified release date. Instead, it could serve as a way for music enthusiasts to connect with others in their community. “It kind of morphed in the third year, where everyone decided to have a celebration and not just put out this limited stuff,” says Hirzel. “And that’s what Record Store Day is, it’s a celebration of independent record stores and that community, by getting people to come out and enjoy their local record store.”

Now, record collectors and music fans have a lot more to celebrate. Record Store Day’s fifth year boasts releases that appeal to fans of classic rock, post-metal, hardcore, hip-hop, folk and beyond. And those are just the items for purchase. Each store is finding ways to reach out to their audiences in new and inventive ways. Dave’s Records will be touting free cupcakes and candy to attendees so they can snack their way through Crain’s store. Saki will be featuring eight live bands—Hirzel calls it an “in-store marathon”–as well as CHIRP DJs and food trucks.

Saki’s vast offerings are the product of months of preparation for Hirzel and the store’s employees. “The two months before Record Store Day is probably our craziest time of the year,” says Hirzel. “We probably start organizing the event two to three months out. Not that we really need to, but it’s just nice to get some things confirmed early on, so as we start dealing with ordering and receiving of all that stuff we can focus on that.”

Five years on, Record Store Day has grown an astounding size. The sheer number of releases, as well as Chicago-centric events occurring, is almost overwhelming, but in a celebratory way. “Even though it’s such a big thing, and at times it feels so overblown and there are so many releases to keep track of, on the other side I do hope it keeps getting bigger,” says Hirzel. “It makes more work for me, but I do hope it gets bigger and bigger because I think it’s a pretty special thing, and I hope people continue to care about it.”

Beverly Records (11612 South Western) is offering a ten-percent discount if you check in on Yelp during Record Store Day.

Bucket O’ Blood (2307 North Milwaukee) is offering ten percent off to those who purchased items from fellow Logan Square record store Saki, and it’ll be hosting acoustic performances by Annie Strong of This Is My Fist and Jason Smith of Sass Dragons and Rad Payoff.

Canasta will perform at Forest Park’s Cyklopyx Records (7511 Madison) at 11:30am.

Dave’s Records (2604 North Clark) is offering up a multitude of free goodies, ranging from cupcakes and candy to posters and Record Store Day bags.

Dusty Groove America (1120 North Ashland) is featuring a live performance by Otis Clay and other goodies like free giveaways and a live magic show.

Jazz Record Mart (27 East Illinois) is hosting live performances and is currently running a “buy three get one free” deal on used CDs in preparation for Record Store Day.

Lincoln Square’s Laurie’s Planet of Sound (4639 North Lincoln) is holding nothing back for the fifth Record Store Day. Goodie bags will be given away to early attendees, WXRT’s Terri Hemmert will be a “guest record clerk” at 4pm, and the wiener connoisseurs at Chubby Wieners will have their “Wiener Wagon” out front to give free dogs to those with a receipt from Laurie’s. There will be live performances by Martin Rivas at noon, Variety Lights at 1pm, Elvis, Angotti, Dawson & Burch, Ltd. at 2pm, Casey McDonough and Scott Ligon at 3pm, Astrobrite at 6pm, Blizzard Babies at 7pm, and a DJ set from 6pm-8pm by DJ Peroxide.

Local label Numero Group is setting up a pop-up store at the Empty Bottle (1035 North Western).

Permanent Records (1914 West Chicago) is opening at midnight on Friday, featuring a new release from the store’s in-house label. On Saturday it’s playing host to live music from Ono, Psychic Teens and Vyto B at 4pm.

Reckless Records is the exclusive retailer for seven-inches by both Ropes and Holy Fever, a semi-exclusive host to Integrity’s “Palm Sunday” and, in a collaboration with Indiana’s Three Floyds Brewing, will offer the exclusive release of a new rye pale ale entitled Rye’d Da Lightning. The Milwaukee Avenue (1532 North Milwaukee) location is hosting in-store performances from Radar Eyes at 2pm, Fake Limbs at 3pm, Spires That in the Sunset Rise at 3:45pm, Bloodiest at 4:30pm, and Circles at 5:15pm. The Broadway (3126 North Broadway) location is playing host to Pamphleteers at 2pm, Running at 3pm, Verma at 4pm, and Atlas Moth at 5:30pm. Not to be outdone, the Loop (26 East Madison) location is hosting performances by Arborist at 1:30pm, Psalm One at 3:30pm and Cloud Birds at 4:30pm. That night, they will be hosting an event at Bottom Lounge (1375 West Lake) where Sweet Cobra, the Chicago Thrash Ensemble and the Party Downers will play, and the exclusive Rye’d Da Lightning beer will also be available.

Saki (3716 West Fullerton) is hosting an in-store marathon, with Santah at 1pm, Bare Mutants at 2pm, Cains & Abels at 3pm, Cross Record at 4pm, Minor Characters at 5pm, Hollows at 6pm, Opposites at 7pm and The Runnies at 8pm. CHIRP DJs will be playing records in-between acts; there will be raffles, games and food trucks; and other Logan Square establishments will be offering discounts with a receipt from Saki.

At Vintage Vinyl (925 Davis, Evanston), The Luck of Eden Hall will be performing at noon.