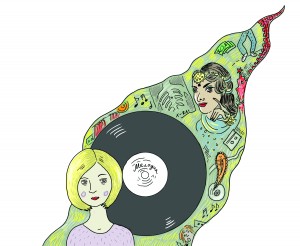 In Soviet Russia it was hard to put your hands on any decent vinyl records, so you pretty much bought anything you could get, be it folk songs, classical concerts or speeches of our revered leaders recorded at some party session.

When Indira Gandhi was prime minister of India in the 1980s, our countries became friends and Bollywood movies gained tremendous popularity. Soundtracks to them were some of the most desirable vinyl recordings around. My mom, who worked at a radio station at the time, managed to get quite a collection. As a result, I spent a big chunk of my childhood wrapping myself in a blanket and dancing around our apartment, doing the moves of what I thought were Indian dances and listening to the sentimental lyrics sung by Bappi Lahiri and Mahendra Kapoor. I took only a small part in a mass Bollywood hysteria; other girls were much more affected. For instance, two of my older sister’s classmates dressed like Indian actresses (they went for curtains rather than blankets), ran away from home and jumped on a train, hoping to get to India and unite with their favorite singers and actors.

There was also “music on the bones” that my parents listened to. This name was given to copies of “rare” vinyl records of Western bands, illegal homespun recordings on plastic X-ray plates. You could listen to The Beatles and The Rolling Stones while simultaneously contemplating the image of someone’s X-rayed chest bones. It was also possible to get an authentic foreign record from “under-the-table” sellers, but they cost half an average citizen’s salary.

I had an easier time with music. My adolescence occurred in the mid-1990s, after the collapse of the Soviet Union, when a stream of Western music poured into Russia with all the strength of something previously restrained. The most difficult part of this musical chaos was to filter the good from the bad. We were too inexperienced to distinguish innovators from imitators, so we listened to Led Zeppelin and Deep Purple, Michael Jackson and ABBA, A-ha and Milli Vanilli with equal enthusiasm.

I was lucky that my sister’s friend was one of the first DJs in our native city of Kazan. Through him I developed my own taste in music, discovering Radiohead and The Cure. When I tell my American friends that I was enamored with these bands as a teenager, they say, “Who wasn’t?” It’s hard to explain to them that back in the nineties in Russia, in my native city of Kazan, I was the only one among all of my peers and classmates who knew those bands even existed.

Nowadays you can get any kind of music in Russia, and if you do not want to pay for the official copy in a record store, there are plenty of sketchy kiosks with illegal disks that cost almost nothing. It’s copyright infringement, of course, but it also reflects back to the times when good music was scarce, and people had to make their own homemade copies to be able to enjoy it.  (Elena Rodina)