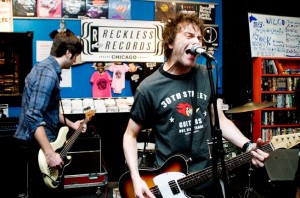 I went to high school in the mid-nineties, during the heyday of Nirvana, The Smashing Pumpkins and Pearl Jam—and I didn’t care. My interests were much, much less cool: The Beatles, The Stones, The Doors and Tom Petty. So, yes, while my classmates were rocking out to The Beastie Boys, Flaming Lips and Green Day at Lollapalooza ’94, I was watching the reformed Lynyrd Skynyrd knock out a killer sixteen-minute rendition of “Free Bird” at the old Rosemont Horizon.

I grew up just blocks away from the old Reckless Records on Broadway and, as much as the preferred narrative here would be how I was introduced to a nascent indie culture by proto-hipster record-store clerks spinning “Wowee Zowee” and “Bee Thousand,” I was probably ignoring all that playing in the background with “Steve Miller Band’s Greatest Hits” on my Discman while rifling through their CDs looking for a used copy of The Beatles’ “Anthology 1.”

I’m happy to say my tastes took a decidedly left turn in college and, while I was still looking backwards, I was at least getting a little cooler. I don’t think I can overemphasize how valuable Reckless was to me in terms of fostering and developing my love of music those years. Keep in mind, this was still the pre-Napster, pre iTunes, pre-Pandora, pre-Pitchfork era. Whereas now you can go online and surf through dozens of indie tastemaker’s “Best of” lists, back then I was pretty much limited to Rolling Stone and Spin magazine’s end-of-the-year issues or whatever I heard about through word of mouth. That, and what my friendly neighborhood Reckless clerks had up in their “Staff Picks” and their personal bests of the year. It was through them that I was really introduced to what are now some of my favorite bands or, in some cases, entire genres. Remember that scene in “High Fidelity” where Cusack puts on the Beta Band? That was me, with The White Stripes. I heard the opening guitar licks of “Jimmy the Exploder” blast through Reckless’ speakers and, just like that, an entire new wonderful world populated by bands with “The” in their names (The Detroit Cobras, The Makers, The Reatards…) was opened up to me. Alternative hip-hop like The Roots, Blackalicious, and Mos Def and Talib Kweli, the neo-psychedelia of the Elephant 6 collective, Afrobeat, classic Johnny Cash—when shuffling through the stacks and stacks of discs, I would make sure to set aside anything that one of the staff had taken the time to affix a sticker with their personal endorsement on it. One of the clerks had slapped a couple of labels that simply said “!!!!! Buy this now !!!!!” to Funkadelic’s “Maggot Brain,” and “Standing on the Verge of Getting It On.” So I did. A week later I came back and picked up “Let’s Take It to the Stage,” “One Nation Under a Groove” and “Cosmic Slop,” and never looked back.

Even though I certainly wasn’t friends with any of the staff (every time I got a little “huh” and nod of approval for one of my purchases, though, I felt really cool) there was definitely a sense of community. Especially since places like Coconuts Music, Tower Records and Virgin Megastore were still going strong, it felt like all of us were engaged in something only quasi-legal—like we had found a loophole in the system. We were paying basically half what the chain stores were charging, and most of the time we had a better selection.

Even today, when I can hop right over from Pitchfork’s Best New Music to iTunes or Amazon and within minutes be enjoying, say, the new Spiritualized album, there’s definitely something to be said for just spending time hanging out at an actual, physical record shop. One of my favorite things in the world is that, even after a decade and a half of collecting music (over 140 GB on my iTunes and counting) I’m still finding new stuff to enjoy. Just the other day, I was at Reckless rifling through the Soundtracks section looking for a copy of “Inglourious Basterds” (which I found, for $7.99) when I came across a $3.99 copy of Willie Hutch’s soundtrack for the 1973 blaxploitation pseudo-classic “The Mack.” Did I walk into Reckless with the intention of buying Willie Hutch’s The Mack? No. Had I even heard of Willie Hutch before two weeks ago? No. Am I grooving to “Theme of The Mack” right now, as I write this. You’re damn right. Thank you Reckless. (Jonas Simon)