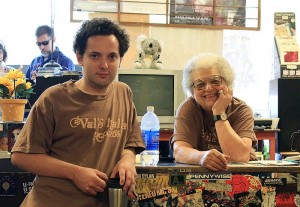 I first met Val Camilletti in 1983. That was back when I sold audiophile recordings through the mail and we talked about putting some of those newfangled compact discs onto her shelves on consignment. Her shop, Val’s Halla, was already an Oak Park institution. Two years later, I opened my own compact disc store about a mile away. But despite my ability to persevere through the rise and fall of the compact disc, I am always going to be jealous of her fame, longevity and commitment to musical recording.

2012 marks the fortieth anniversary of her shop and the fiftieth anniversary of her career in the music business. I don’t even want to try to remember all of the music stores, large and small, in the Chicago area that have vanished over that period. Her business even survived that most dire of brick-and-mortar events, the deadly lost lease, and six years after she relocated to the Oak Park arts district, she still is going strong. And still selling vinyl.

She never bought the argument that compact discs sounded better, and even though she had to start carrying discs when new releases in vinyl trickled down to nothing, she never dropped the older format that now is making a comeback. Even if young people are now downloading their music from the Internet, they still look for vinyl to play the dusties from the sixties and seventies—which Val has been accumulating ever since they were first released.

And she never treated her store as if it were strictly a business. It’s more like a small community center, with stacks of cultural history, her collection of mascots and, of course, the Elvis shrine built into the bathroom (in honor of the King’s last moments on earth).

In celebration of Record Store Day, Val’s Halla will be open two hours earlier, at 9am. She’ll ply her customers with coffee and donuts, and there will be a sale throughout the day on everything in the store, which, of course, includes every format that ever appeared in her forty years of business: 8-tracks, VHS tapes, laserdiscs, LPs, cassettes, 45s and DVDs. (Chris Miller)