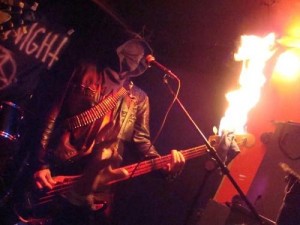 Not to ruin the band’s mythology, but Midnight’s actually fronted by a guy who steered Boulder, Abdullah and a few other Cleveland-based metal bands during the last decade and change. Midnight, for some reason, has captured the attention of metaldom, perhaps in part due to the fact that frontman Athenar has gone out of his way to remain a character as much as a real human being. Given the band’s musical affinities, the scant live shows and purposeful obfuscation of identity, it makes sense. Equal parts early-Priest, sundry NWOBM and enough Scandinavian influence, Midnight sits at the intersection of punk and hardcore, metal and thrash. It’s a balance innumerable ensembles attempt, but few properly achieve. Glancing at a song title like “Rip This Hell” could summon a bemused chortle, but all that mid-tempo riffing makes up for the name, even as it functions as a pretty engaging refrain. And refrains are something Midnight seems to excel at. There’s a difference between coming up with a trite phrase that summons a song’s general bent and coming up with one that’s succinct, evil and catchy. Laid out over Midnight’s low-press-run, hard-to-track-down singles–collected on “Complete and Total Fucking Midnight”—are songs like “Hot Graves,” another song with a kinda ridiculous title. The punky tempo and Athenar’s ability to turn the two words into one syllable meld a bit of black metal vocals with musical backing that comes off as what we all wished Pentagram turned into. Issuing a split with Toxic Holocaust on Relapse in 2011 may provide for Midnight achieving a significant audience outside the Midwest, but Friday, the band sits in the middle of a five-act bill. The Gates of Slumber, Scythe, Ares Kingdom and Stone Magnum also perform. (Dave Cantor)