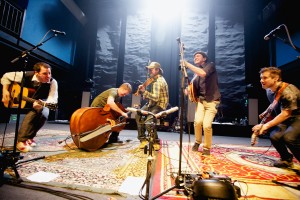 As the David Grisman-Jerry Garcia gospel continues to spread and constitute a musical template to emulate, scores of new bluegrass players seek to enliven the traditional music with innovations they’ve found in third-generation recordings. The Infamous Stringdusters is one of those ensembles. Extending the possibilities of the genre and extolling the technical talents of a group’s players sometimes gets in the way of the music. But far more frequently, the new crop of bluegrassers—everyone from Railroad Earth to the Yonder Mountain String Band—toss in a heap of country-styled crooning. And it doesn’t always turn out too well. The five minutes it takes to get through the Stringduster’s “Masquerade,” off the group’s 2010 “Things That Fly,” could be better spent listening to Del McCoury cover Ola Belle Reed’s “I’ve Endured” two or three times. “Bound for Tennessee,” from a Stringdusters’ effort which charted higher than its other releases, is just about the same—all sorrowful melody and not much to hold onto or sing along with. It’s just soft country rock. But when the ensemble dispenses with its songwriter’s tendencies, the Stringdusters are a sturdy handful of players, able to find a simple groove and exploit it for as long as all involved see fit. The group’s newest disc, “Silver Sky,” includes a track called “The Hitchhiker.” And while the song counts a good bit of vocal harmony during its first few minutes, when the band lands on an odd three-note pattern, improvisation follows that has little to do with bluegrass—or newgrass. Instead, the workout’s just beguiling interplay. That’s not to figure the song, or this new album, as some sort of revelatory step for the genre. For the most part, the Infamous Stringdusters just write songs well enough to be worked over in any American style, than tart it up with some solos, which is why live performances seem to be what the group’s legacy is staked on. (Dave Cantor)