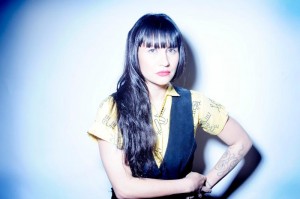 Successes in a vast array of the new millennium’s bigger garage groups only emboldened drummer-turned-frontwoman Frankie Rose. Her 2010 solo outing skirted around the periphery of the genre she’s most associated with, as tunes like “Must Be Nice” sound like it should be decaying on the b-side of a late-sixties single in your parent’s basement. Working with the same music on so many different projects, though, must have become tiresome. Rose’s new disc, “Interstellar,” discards her past, leaving sixteenth-note floor tom beats behind. There’s a difference between sounding cool and sounding icy. And all Rose does on her latest offering is sound stoic. Turning from the constrictive auspices of a garage-jangle, Rose crafts an album that actually sounds like it’s from the eighties, not just like it’s supposed to be from a few decades back. It’s mostly due to the singer ditching her band and embracing the deadened simplicity of electronics. The only living thing on “Interstellar” is Rose’s voice and some occasional guitar. “Had We Had It” sounds like the opening title music to a John Hughes flick if Kraftwerk produced it. The living refrain of “After all …,” leading to the chorus is almost at odds with its musical backing. But the entire thing’s so light and airy that the song’s disparate pieces float together long enough to form some cohesive whole. What’s surprising is the following track, “Night Swim,” incorporates some of what Rose was trying to move past—it’s Nick Cave fronting the Go-Go’s. Closing out “Interstellar” with “The Fall,” a baroque piece sans melody, Rose moans some indecipherable, distant phrases as listeners pick up on a guitar line that could be the centerpiece to just about any rock track instead of being laid over undulating synthesizer. If the album isn’t enough to confound Rose’s accrued fanbase, it should engage a new swath of fans that never really cared much for all that revamped garage stuff. (Dave Cantor)