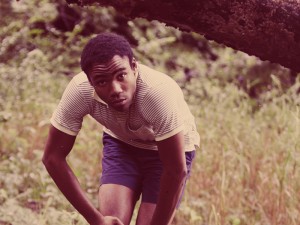 It’d be a neat trick if someone were able to be completely unaware of Donald Glover. It’s been hard to avoid the Georgia native on television over the last few years—the tacked-on skits at the end of his show “Community” are some of the most bizarre moments on broadcast TV in memory. But before that, Glover was writing jokes for some of the tube’s most engaging sitcoms, not to mention the material he crafted for a stand-up set he’s toured on. Along with all those punchlines, though, Glover developed the Childish Gambino name. He’s been able to take a rather innocuous tag and turn it into a considerable recording concern. Even if fans of Glover’s other work don’t see the merit in rapping occasional couplets about “The Office” or talking about being a nerdy black kid when everyone says you’re actually supposed to be a tough guy, the volume with which it’s all been dispensed is a miraculous feat. Cropping up on the internet with increasing frequency, tracks drawn from Glover’s quiver aren’t necessarily going to connect with the blog-rap set. But his ability to take the medium, inject the entire thing with a bit more pop sucrose than his peers and leave listeners wondering how serious he is about songs like “Got This Money” makes the project an intriguing thing to watch unfold. Releases like “Culdesac” and “Camp” are distinctly personal in subject matter. But if Glover proves capable of addressing some more weighty topics, Childish Gambino might be around for a pretty long time. If nothing else, the actor and MC hit the charts in a significant way while simultaneously starring in a relatively popular show. That’s Jamie Foxx territory. Maybe someone’s writing the “Woody Allen Story” and wants some interesting casting. Glover’d probably be able to fit it into his schedule. (Dave Cantor)