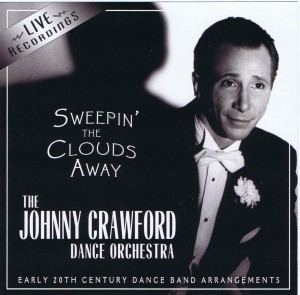 A half a century ago, Johnny Crawford was a teenage idol charting Top Ten hits such as “Cindy’s Birthday” and “Rumors” and playing Chuck Connors’ son on the popular western ABC television series, “The Rifleman,” which remains a daily dinnertime staple of Chicago-based MeTV. Crawford also sang on the show (and as an original Mouseketeer before that) and recorded five albums.

Still, none of that prepared me for the shock that I had upon first hearing his new album, “Sweepin’ the Clouds Away.” A vintage recreation of authentic dance band arrangements from the 1920s and 1930s, “Sweepin’ the Clouds Away” is a collection of live tracks of the Los Angeles-based Johnny Crawford Dance Orchestra, an eleven-piece collective formed in 1990 following Crawford’s stint as the vocalist of Vince Giordano’s Nighthawks Orchestra. With Crawford as leader/vocalist, the Johnny Crawford Dance Orchestra painstakingly seeks to perform music of that elegant bygone era, paying careful attention to the performance practices of the time. A fixture at Hollywood celebrity parties and entertainment industry functions, this is the group’s first album.

There is no shortage of people doing this kind of music, to be sure, but virtually all attempts I have come across contemporize the music by either featuring instruments and later arrangement trends not known in that era or through using more modern styles of singing and playing that sound out of place.

Not here. This sounds so authentic that it is actually disconcerting to not hear static and pops and to be able to hear the individual lines of the music so clearly. Crawford’s carefree crooning style at times suggests Rudy Vallee, but upon closer listening, he is actually more reminiscent of a young Bing Crosby in his early jazz days, when he was still a tenor. These are musical renditions, to be sure, but Crawford is able to bring his actor prowess to his ability to communicate inner meanings of lyrics.

Particularly memorable is the title track, Sam Coslow’s “Sweepin’ the Clouds Away” from 1930’s “Paramount on Parade,” heard here in a dance-band arrangement by one of the vintage arrangers of the day, Illinois native, Chicago Musical College graduate and later Hollywood composer/arranger Frank Skinner. Skinner arrangements make up the bulk of the album, which also includes songs by Jerome Kern and Oscar Hammerstein II, Rodgers and Hart and Duke Ellington, among others.

Some of the album is unusually personal, such as Harry Warren’s “I Found a Million Dollar Baby (in a Five and Ten Cent Store)” which was written about Crawford’s Chicago grandparents, a song plugger and a Woolworth’s pianist. Even the contemporary band photographs and art direction—which are pictured alongside fascinating vintage photographs—are reminiscent of the era. The overall effect of this extraordinarily optimistic old-time party album is like hearing a collection of vintage 78s brought to life—quite an impressive feat.  (Dennis Polkow)