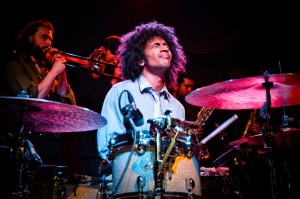 “There’s a certain scene on the East Coast,” drummer Alan Evans says. “The Northeast, there’s just a whole crew of musicians that roll together. It’s a tight-knit family.”

Evans, who’s sat behind the kit in Soulive over the last thirteen years, should have a pretty good handle on what’s happening in the coastal funk, soul and jazz scenes. Coming up with his brother Neal, Soulive’s keyboardist, and Eric Krasno, the group’s guitarist, there’s a tangible brotherhood thing going on beyond blood relations. So Alan taking the time to assemble his own trio speaks highly of the folks he’s decided to include.

“Beau [Sasser] is a great organist. The difference between playing with him and Neal… I play drums differently when I’m playing with Neal,” Alan says over the phone from his Northampton, Massachusetts home.

On its first disc, “Drop Hop,” the Alan Evans Trio, which also includes Danny Mayer on guitar, offers similar strains of soul and funk as the drummer’s better-known group. Just like there’s a difference between how Alan plays with his brother and how he plays with Sasser, each ensemble pulls different ideas from the same swath of influence.

NOLA’s Meters and Memphis’ Booker T and the MGs still hold considerable sway over the proceedings. Alan’s performance on the trio’s “Whistlin’ Willie” could have come from a Soulive session: The playing’s loose enough to allow for funked-up guitar octave jumping, but tight enough to be featured on a break or two. That second stance crops up amid Soulive’s discography, but seems to be a bit more prevalent on this latest recording. “Rum Runner” isn’t all sparse funk, but seems restrained in a way Alan’s other band isn’t. Any perceived difference separating ensembles, though, is unintentional—the drummer just gets the spirit and follows it.

A more noticeable distinction between Alan’s side projects and Soulive are the venues he’s set to play. Soulive has hit festivals and worked with platinum-selling recording artists. The Alan Evans Trio hasn’t yet run through its entire set live in front of an audience.

“To me a stage is a stage,” Alan says. “I’ve been on stadium stages and I’ve been in fifty-person clubs. To me it’s all the same. I can’t even say I prefer one or the other—wherever I play, I play the same… I always get down.”

Alan still gets as resolutely excited about his craft as if he just picked up drum sticks for the first time. “The funny thing is, some friends will come up to me like, ‘Yo, that was great. I was right in front, did you see me?’ And I just get in the zone,” he says. “A person can be literally right in front of me and I won’t see them. I see that there’re people in the [venue], but that part of my brain just shuts down. It’s needed, I guess, for other more important things.”

Alan is open to new performance settings and all brands of groove music, but there is a particular kind of person he feels is necessary to have in his band. “I just want the best people around me,” he says. “I know a lot of great musicians who are assholes… If you have good people around you, you’re going to make good music.”

A bit of that wisdom comes as a result of being realistic about humanity and ego; daily life alone leads to all manner of inexplicable interactions. But Soulive’s early days taught Alan a bit about dealing with the jazz cognoscenti, people’s expectations and their hang-ups.

“Neal and myself are brothers. A lot of people don’t know that we’re half Polish—half white and half black,” Alan explains, leading into a brief history of Soulive’s off-stage interactions. “To the person who doesn’t know, they just look at the stage and think it’s two black guys and a white dude—but they’re not playing R&B.

“What used to happen at jazz festivals when there are primarily black bands, people used to think we were from outer space. It’s just unfortunate. And since we’re not playing smooth jazz, it doesn’t make sense to them.”

The fact that race still plays some part in a musician’s day-to-day interactions with the business side of his routine is more than unfortunate. Music, though, is a way to escape from expectations, stretch out and hope for the best, knowing if a misstep occurs, there’s always an opportunity to overcome that momentary pratfall.

Alan Evans wants to assure fans of one thing, though.

“It’s not gonna be a Soulive show.”