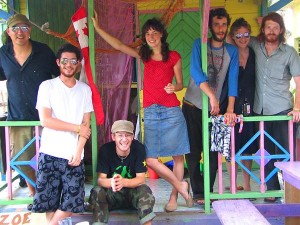 Upstate New York’s given the world a number of acts that defy place and time–Ithaca’s John Brown’s Body, for one. Giant Panda Guerilla Dub Squad isn’t as prolific, but has been a substantial voice in the hippified reggae scene over the last half-decade. The Rochester-based band’s first offering, “Slow Down,” was an anemic attempt to wrestle a bit of personality from a genre that has very little to do with the collective GPGDS experience in America. While reggae and dub are wildly restrictive musics, each allows for a rhythmic variation. Sure, it’s usually all behind the beat, but rhythm tracks from song to song should be readily distinguishable. And on “Slow Down,” that’s not always the case. Of course, James Searl’s strained voice and predisposition for using words like “brethren” don’t help much. Occasional tracks like “Burkina Faso” get it together long enough to relate a distinct musical idea, if only for a moment. What’s most interesting about the disc–and the band–is that its first long-player ends with “Sunshine Dub,” a melancholy dub, showcasing the melodica during its six minutes. Promising as the track is, the band decided to tour more frequently than record, leaving that instrumental as GPGDS’ last studio statement until this year and the release of two albums. The first, “Country,” doesn’t deal in Jamaican roots, but America’s tradition of string-band music. With the dramatic departure from its earlier recording, it’s a telling statement that the ensemble had the persistence of vision to begin “Country” with a tune called “Sunshine.” The album opener and GPGDS’ earlier track of the nearly same name don’t share anything in common–even the songs’ tones are dramatically different. Heading into what ranks as the band’s second phase hasn’t summoned relevant creative statements, or even worthy of revisiting a few years on. But reggae’s been through worse and persisted. Asheville, North Carolina’s Toubab Krewe headline. A dollar from the purchase of every ticket will be donated to Instruments 4 Africa.