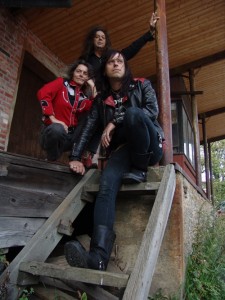 Being included on “Nuggets” hasn’t assured anyone success–in fact, it seems to have ensured musicians’ obscurity. From the show’s sixties heyday, through the punk era and the nineties Northwest and into the new millennium, only the most persistent folks have made it. Fred Cole, whose band the Lollipop Shoppe has been anthologized alongside the Seeds and various other sixties punkers, worked up Dead Moon along with his wife Toody and moved onto the Pierced Arrows a few years back with a release on Vice Records. As shambolic as Dead Moon could be, the band had moments of pop clarity. “I’m Out Nine,” off the group’s 1990 “Defiance,” never kicks into full-on rock mode, but Fred Cole’s quaking voice makes the song’s three chords feel fuller than they should. A persistent bass line pushes the frontman forward, but his head-down attitude seems like the real propulsive force to the slow, sentimental track. Pierced Arrows isn’t bereft of engaging arrangements, but a huge portion of the troupe’s “Descending Shadows” sounds like biker poetry spit out over barely competent bar rock. Disbanding Dead Moon after twenty years of toiling under its auspices was an understandable move for the Coles–the pair’s cultural cachet would have carried over to any project they decided to pick up. But what Pierced Arrows aims for—and usually misses—are trappings of that older band’s heritage. The Arrows’ “Paranoia” sports an instrumental interlude, one that gets as noisy as Dead Moon fans could want. But even during a “Descending Shadows” highlight, drummer Kelly Halliburton drops the beat. Recording and releasing mishaps is a punky tradition, but those planning to catch the group live should be prepared for a few miscalculations at the Bottle. Fred Cole’s gotten over on emotion, not musical acuity during the last five decades, so it probably won’t matter much. Quintron & Miss Pussycat headline. (Dave Cantor)