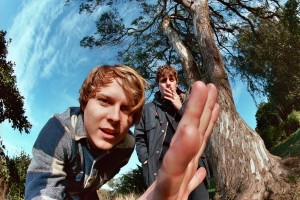 For those of you who lost all interest in Ty Segall around the time “Lemons” was released, there’s no tremendous need to rush out and hunt down his collaboration with part-time Strange Boy Tim Presley, who masquerades as White Fence. The pair don’t do any wrong on “Hair,” but Mikal Cronin sitting in on bass only points to the fact that his work with Segall on “Reverse Shark Attack” was a bit more intriguing. Well, the Beefheart cover was more intriguing. Segall just churns out enough product to minimize any success he might actually record. White Fence hasn’t quite hit that point in his release schedule but seems headed in that direction. Instead of taking the rough-trade approach to sixties schlock, White Fence activates a more tuneful brand of rock, hitting up the Beatles for inspiration as often as the Count Five. Way back in 2010, the self-titled “White Fence” disc showed up displaying a penchant for softer, seemingly more thoughtful work, even as “Destroy Everything” displayed Presley’s ability to get scuzzy. “Is Growing Faith” seemed to pass without much fanfare despite it being released on Woodsist the following year. But White Fence being attached to the double album “Family Perfume” in addition to the effort with Segall points to a creative mind that hasn’t had the benefit of finding a foil who’s capable of throwing in help with editing. Cutting down “Family Perfume,” which constitutes about eighty minutes worth of music, wouldn’t have hurt the proceedings. Since the sound Presley’s developed is so consistent—“Hey! Roman Nose” displays his melodic talents as well as that properly strangled nasal drawl being a decent representation—no one would notice if a track or two were missing. Live, the whole thing’s likely to take on a tougher sound with guitar solos getting a bigger feature. But experiments are a funny thing—no one knows what can happen. Strange Boys and Bitchin’ Bajas open. (Dave Cantor)